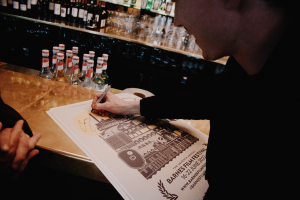 Last Sunday Barnes Film Festival presented a special event at Barnes’ Olympic Studios: a screening of Wolf, the new film starring George MacKay, followed by a Q&A with the man himself.

Mr MacKay had certainly attracted a crowd, his appeal seemingly not limited to any one group of people. While the view from the back of room only highlighted the variety in the backs of heads present – everything from mullets to delicate white bobs, if you were wondering – the diversity amongst us came to light more clearly later, with the questions revealing that such attendees included PhD researchers and even a fan who had travelled from Korea.

But, regardless, before any such questions could commence there remained the matter of the film. Possibly the most difficult part is putting any kind of label as to what the film actually is, although the change in the audience’s reactions from slightly unsure stifled laughter to dead silence as the film developed gives as much indication as any. A slightly absurdist tragicomedy or a straight-up conversion-therapy drama, depending how you choose to see it, the film resembles what Yorgos Lanthimos and Oliver Sacks might dream up if left in a room together, albeit with much more empathy towards its characters.

MacKay plays the role of Jacob, a young boy who believes himself to be a wolf trapped in a man’s body, who is sent by his parents to a ‘species dysphoria’ treatment centre. Largely, the film is concerned with what it means to be human, and the suffering attached to feeling like you don’t belong in your own skin. (Though it did take me moving past wondering if George’s wolf-like character being called Jacob was an intentional Twilight reference to appreciate this.) After the strange but ultimately curious and tender film came to a close, the audience quickly rose out of their beguiled stupor in order to welcome the night’s special guest with a hearty applause.

When asked his first thoughts on the script and what drew him to the project, George (somewhat ironically) spoke articulately of his interest in how many questions it brought up. Amongst other things, he was keen on how the film speaks to a debate on what it is that makes a person, and the questions of identity that come along when your physicality doesn’t match your perception of the world. He also spared no enthusiasm when speaking of how much the prospect of working with revered movement coach Terry Rotary had excited him, particularly after loving his work in the Palme D’or winning film The Square. According to George, Rotary was influential when he was “workshopping the wolf”, and helped the actor to remove himself from his own thoughts, describing how “when thoughts go it feels incredible… I didn’t realise how much I existed in my head”.

He went on to talk further on the physio-spiritual relief that working on the film with writer-director Nathalie Biancheri provided him, saying it completely removed him from self-consciousness by making him practice how to “hold a (animal-like) gaze without needing anything in response”.

Perhaps unsurprisingly given the film’s subject, George also shed light on some of the idiosyncrasies of the preparation and the production when asked how he prepared physically for the role. He detailed instances of crawling around on all fours with a raw steak hanging from his mouth while attempting to goad a howl from a dog on set, emphasising how once he had committed to such a part, he “wanted to do everything myself”.

He also detailed how, with movement coach Rotary, he would spend hours getting out of the same chair over and over again in an attempt to move with his whole body and mind rather than just his legs. When successful, he says, such an ability gave him a unique sense of lightness. This wasn’t the only epiphany George had while making this film, as, when asked how it changed his headspace during filming, he also states with a big smile on his face that “howls feel great!”.

And with that, the questions start to draw to a close, but there’s just enough time left to hear about George’s next two projects, “I Came By” and “The End’, which are helmed by

acclaimed directors Babak Anvari (Under the Shadow) and Joshua Oppenheimer (The Act of Killing) respectively. An exciting time to be a George MacKay fan indeed. 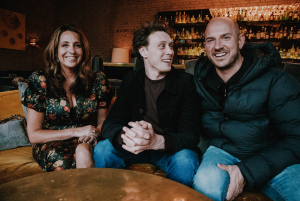